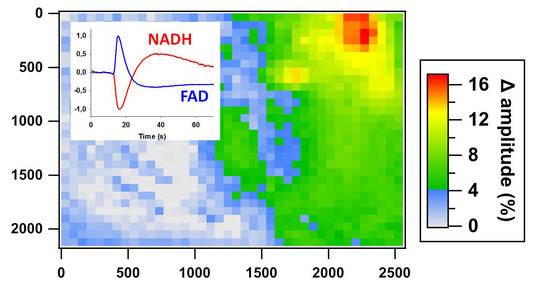 Our major research focus is on the correlation of cellular metabolism (energy production and consumption) and electrical activity in neurones. As the function of the brain is associated with high energy and oxygen consumption, we are interested in the metabolic demands of specialised neuronal properties such as high firing rates or temporal precise integration. We are studying these topics by a combined experimental (imaging of NADH, FAD, ATP, O2 glucose) and theoretical approach. In particular, we are trying to answer the question whether neuronal metabolism and its optimisation might impose limitations upon neural circuits. We investigate cellular aspects of this topic in the auditory brainstem of Mongolian gerbils (Meriones unguiculatus), an apt model organism for human hearing, and in semi-intact amphibian brain preparations. In the brain of amphibian tad-poles we can study neuroenergetics in multi-synaptic circuits under in vivo-like conditions.

To allow studying neurophysiology in auditory brainstem nuclei under optimal conditions, we have developed and established optogenetic tools for the Mongolian gerbil. This powerful technique successfully used in other experimental animals in vitro and in vivo is now also available for gerbils as prime model for auditory research.

The endocannabinoid system in development & modulation of neuronal function 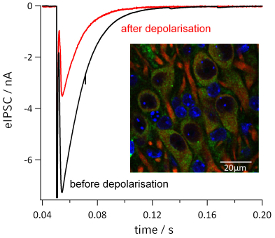 We are interested in the role of the endocannabinoid system in auditory neurones on different time scales ranging from short term adaptation to functional and morphological development. In auditory brainstem nuclei, retrograde endocannabinoid signalling is involved in activity-dependent regulation of the strength of both excitatory (glutamatergic) and inhibitory (glycinergic) synapses.

We are characterising biophysical properties and functionally relevant specialisation of juxtavascular astrocytes. These glial cells have been shown to selectively proliferate in response to acute brain injury.

Function of ion channels, neurotransmitters & ROS in the mammalian gonads

The function of ion channels and neurotransmitters in non-excitable cells such as endocrine cells in the human ovary are only scarcely understood, but are of great interest in the context of human fertility and in vitro fertilisation. We are studying the role of these players in the human gonads by a combined experimental and computational modelling approach. In this context we are also interested in reactive oxygen species (ROS) as both noxious and signalling molecules.

People in the Laboratory