My research aims at understanding how cells communicate with each other in the brain, how this communication underlies computation and coding in neural networks and how it ultimately determines behavior. I am currently investigating these questions in the song-related brain circuits in songbirds at the Max Planck for Ornithology (Seewiesen) in the laboratory of Prof. Manfred Gahr and at the LMU in Munich (Martinsried) in the laboratory of Prof. Benedikt Grothe.

If you would like to learn more about ongoing projects and join, please don’t hesitate to contact me! Internships for motivated bachelor and master students are available!! Currently Maximilian Franck is doing his master thesis on synaptic plasticity in canaries. 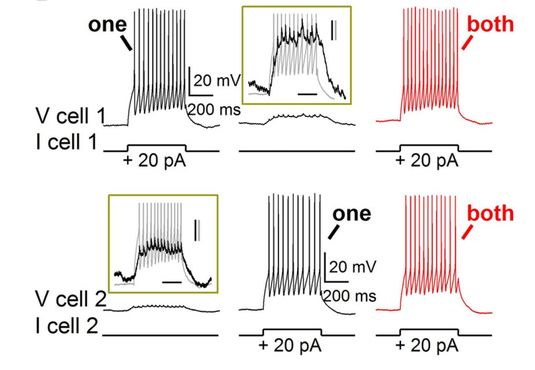 In this figure you can appreciate key properties of electrical synapses (from Alcami, 2018). Two coupled cells are simultaneously recorded with whole-cell recordings in the current-clamp mode: cell 1 (top) and cell 2 (bottom).
Left. Injecting a depolarizing current in cell 1 (top) evokes a subthreshold depolarization and action potentials in cell 1. Part of the current injected in cell 1 flows through the gap junction (electrical synapse) between both cells to cell 2, also depolarizing cell 2 (bottom). Center. The same phenomenon occurs in cell 1 when cell 2 is depolarized. Right. If two cells are simultaneously depolarized, the leak through the gap junction to the other cell is cancelled. As a result, both cells respond stronger (with more action potentials) than if they had been individually depolarized.

Songbirds learn their beautiful songs from their parents, so-called tutors. They sing owing to dedicated specific neural circuits involved in song learning and production (the so-called 'song system'). I am investigating the neurobiological basis of song production and learning in canaries and zebra finches. Songbirds are a great model to link synapses, cells, circuits and behavior.

In this figure you can appreciate a staining of myelin, the insulation of axons provided by oligodendrocytes, ensuring an efficient, fast propagation of action potentials. Highly concentrated at song nuclei, myelin helps to visualize them. Here, nucleus HVC.

Singing is a social behavior. However, it has often been studied out of its social context. I am studying how songbirds interact during singing and how social interactions influence their singing behavior with the help of telemetry in freely-behaving birds.

Male canaries sing elaborated songs. In order to record the song of individual birds in social groups, I equipped these canaries with backpack microphones developped in Manfred Gahr's department at the MPI, making it possible to record the vocal production of individual freely-behaving canaries.